Cyril Ramaphosa seems to be in office, not really in power — but the good news is his authority can grow 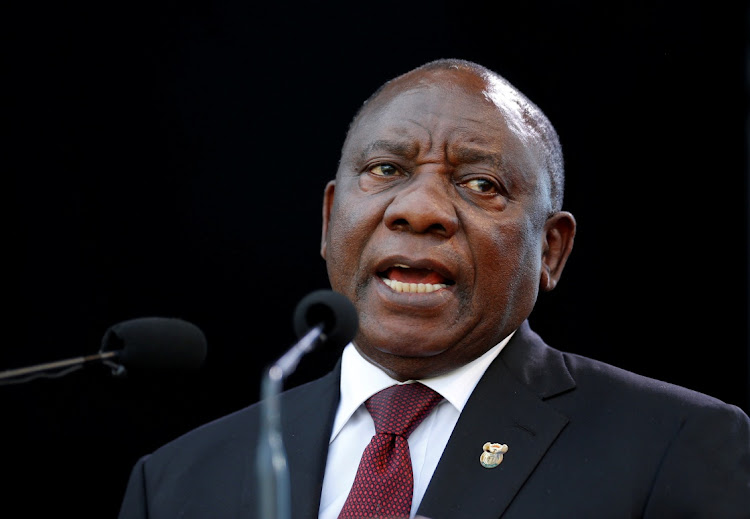 Cyril Ramaphosa speaks after taking the oath of office at his inauguration as South African president at Loftus Versfeld stadium in Pretoria, South Africa May 25, 2019. Picture: REUTERS / SIPHIWE SIBEKO

In the national and provincial elections in early 2019, many ANC voters believed they were delivering a “mandate” to President Cyril Ramaphosa.

The ANC had little option but to place corruption at the centre of its campaign. Continuing the narrative that helped Ramaphosa to secure the ANC presidency in December 2017, he was portrayed as the leader of the “Good ANC”. This grouping, whose boundaries and membership remained uncertain, was ostensibly determined to end the rot left by the “Bad ANC” of the Jacob Zuma years.

The presence of so many members of the Bad ANC on party candidate lists was audaciously incorporated into the ANC’s campaign narrative. Finding itself in the electoral last-chance saloon, the ANC proved that a party really can campaign against itself and win. It is unsurprising, therefore, that public attention has been focused on Ramaphosa’s promised clean-up. At the centre of his difficulties has been his use of presidential powers of appointment.

In 2018, before he had secured his ostensible mandate, he moved very slowly to appoint new heads of the National Prosecuting Authority (NPA), the police and intelligence institutions. Ramaphosa was careful to justify his decisions using commissions of inquiry (SA Revenue Service), high-level panels (intelligence) and ad hoc appointment structures (NPA).

In cabinet, despite widespread predictions that he would be obliged to find room for the likes of Nomvula Mokonyane, Supra Mahumapelo and Mosebenzi Zwane, Ramaphosa banished such figures to the outermost margins of political power: the parliamentary committee system. Why then does Ramaphosa so often seem to be in office, but not really in power?

One problem is that the Good ANC versus Bad ANC narrative has outlived its campaign origins. The deeply enfeebled remnants of the Zuma clique are scarcely engaged in a fightback, but they are waging a war of attrition to make the costs of their prosecution on charges of corruption politically prohibitive. Some Zuma factionalists enjoy the shelter of entrenched offices that are rightly designed to protect their incumbents against easy eviction, notably the secretary generalship of the ANC and the office of the public protector.

There is a deeper concern that Ramaphosa is a reforming president without a central reforming team. Who are the key figures who can elaborate Ramaphosa’s reform strategy in the presidency itself, given apparent weaknesses at the centre? Equally importantly, where are the enforcers who can instil fear of consequences in those who obstruct or even ridicule him? Ramaphosa’s deliberative approach to appointments is a complement to his natural caution. In the absence of loyalty in today’s ANC, he will need also to harness fear.

On occasion, it seems Ramaphosa is not making speedy and appropriate appointments because he is not really clear what he is trying to accomplish. The botched and belated announcements about Eskom’s chief restructuing officer and interim CEO this week have been a case in point. It remains unclear what the incumbents’ roles will be, how long they will be in place, who they will report to and — most importantly — what end-point Ramaphosa has in mind when it comes to the Eskom restructuring as a whole.

The appointment situation is entirely recoverable. Presidential power in SA’s parliamentary system tends to be cumulative rather than being built upon an electoral mandate. As Ramaphosa’s appointments spread gradually across the system of government, his authority will grow. There may be a positive lesson in Ramaphosa’s re-appointment of Reserve Bank governor Lesetja Kganyago to a second five-year term, announced in July. The presidency simultaneously announced the names of two fresh deputy governors, who started work on Thursday.

These appointments were all made easier by Ramaphosa’s earlier decision to retain Tito Mboweni as his finance minister. Before Ramaphosa made his announcement, meanwhile, social media was full of chatter about monetary policy hawks, quantitative easing and Reserve Bank mandates. Once the state president imposed his authority and made his decision about Kganyago clear, the cacophony quickly fell silent.